(Yes, this was the dress I wore)

I know, I’ve written on this topic already but I believe in continuous comments on rules that are nonsensical. Even if no substantial changes are being made, rules such as the dress code implemented in so many buildings across Guyana should continue to be challenged.

Today, forgetting once again that we are a country still trapped with a colonial mentality when even our colonizers have grown from that, I went to the National Communications Network (NCN) for an interview in a dress that dared not have sleeves.

There I was met with two guards, one of whom told me that I could not enter the premises as my dress had no sleeves. (Yes, my arms were that arousing.) I pointed out to him that the sign he was so diligently referring to made absolutely no mention of armless clothes not being permitted.

The other guard after checking the sign told him that I was right, but the guard probably feeling as if I threatened the small modicum of power he possessed refused to hear reason and insisted I not go in. 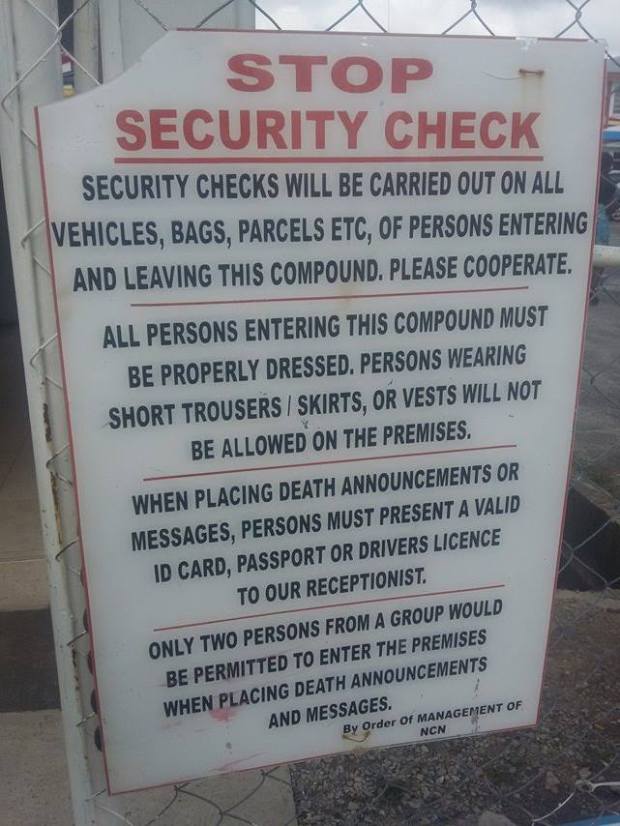 I began to speak to him like the fool he was because he could not understand the rules he was so tirelessly trying to uphold. I only later saw that Sonia Yarde, well known dramatist also had on armless and passed by the same guard but she had no problem entering. Why are we at the whims of irrational beings who cannot even stick to their nonsensical belief systems about how a woman should or should not dress is beyond me.

(See below photo of skunthole guard)

Finally, an NCN staffer came down and offered me her blazer. Realising that I stood no chance in reasoning with an idiot, I pulled it on so that I could leave the guard hut. As soon as I was through however, I shirked it and dared him to come remove me from the compound and continued to refuse to don it again in spite of the many admonitions.

The thing that bothered me with the rule however, was not really the attitude of the airheaded guard, but rather, the attitude of the women who worked in the facility. Yes, they all agreed that it was a stupid archaic rule, but calmly advised me to don the blazer once again. After all, that was the rule and how dare I, a common citizen question that.

I await the day with glee when a government agency will begin turning away Sandra Granger or female parliamentarians from entering buildings just because they dared bare their arm to the public. Maybe only then will women earn the right to bare arms in public venues and not be condescendingly told that those are the rules because by then we would know that often, rules need changing.